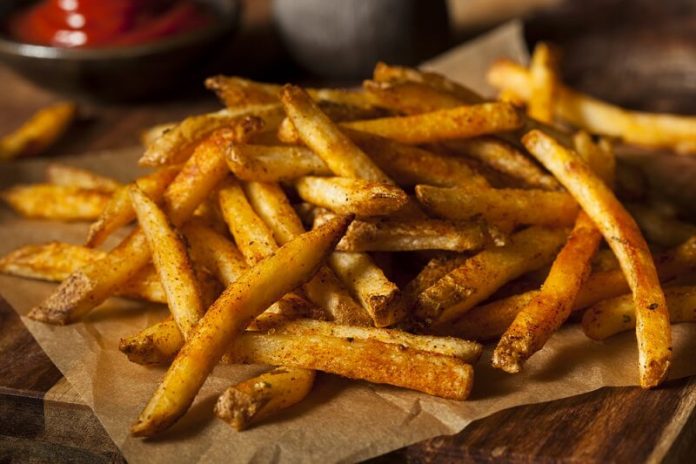 When I posted a recipe on spiced sweet potato fries, a lot of people commented about how their fries always get soggy and lack crispiness. While I gave one tip in this post, I thought it might be useful to talk about this in more detail. Why do fries get soggy and what can you do to prevent it? Below are 10 tips on how to make your homemade french fries (sweet potato or regular potato) crispy (without frying them!).

Water plays a big role in crispiness. It is hard for something to be crispy if it contains a lot of water. This is why many foods become crispier when dehydrated.

Potatoes contain a lot of water, and generally, the more water evaporates during cooking, the crispier the french fries get.

Crispiness can also be produced by something that is called the “browning reaction”. If you have ever burnt anything, you know what I mean.

While a little bit of browning is inevitable, it should be avoided as much as possible in cooking, since this generally means a lot of carcinogens are also present in the food.

In the case of potatoes and other starchy foods (bread, cereal, etc.) acrylamide forms. 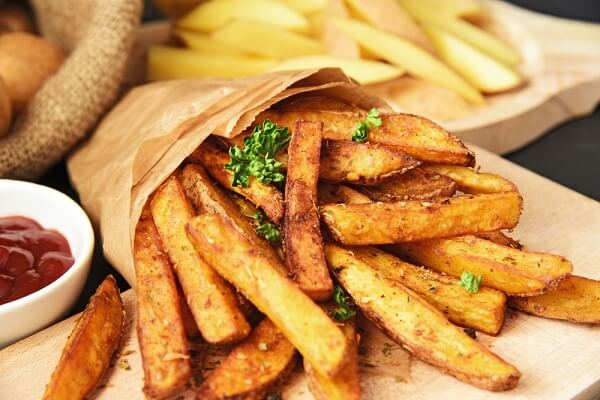 Acrylamide is a chemical substance that forms in carbohydrate-rich foods during high temperatures (above 250°F).

It has been shown to cause cancer in lab animals and an epidemiological study has shown a potential link between acrylamide and breast cancer (while older studies did not show a connection).

Frying is the best way to create a lot of acrylamide. In order to reduce your intake, avoid heavy crisping and browning as much as possible in starchy foods.

Another way to get homemade crispy french fries is by coating them in something that is crispy or gets crispy when cooked (without burning).

Of course, the potato itself will still be soft, but there is a crust outside.

This is essentially what happens during frying — you get a crispy crust of fat. But, there are other more healthful crusts that you can make.

while there are many nutritional and (obviously) taste differences between them, they also differ considerably in water content.

That is why sweet potato fries tend to be not as crispy as regular fries. 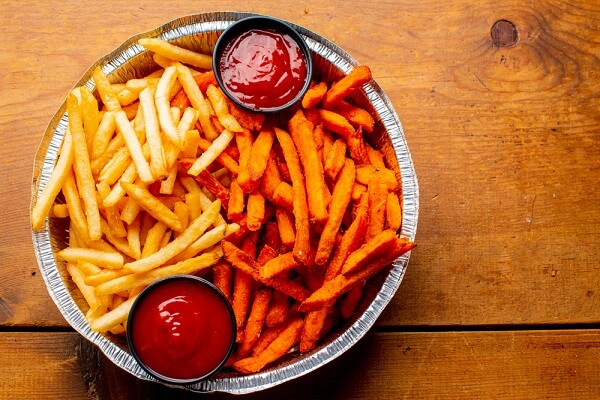 All the tips below will work for both types, but a lot of them are probably not necessary for regular potato fries.

Feel free to use as many tips as you want. It is not necessary to use all of them.

1. Cut them into thin sticks or thin rounds

The smaller the sticks the easier it is for them to get crispy. The thinner something is the larger the surface area/volume ratio.

Water needs to reach the surface in order to evaporate, so this means there is less overall water (less volume) but more area for water to evaporate (more surface area).

Dehydrating literally means taking the moisture out of something. This seems like an obvious solution if we want to get homemade crispy french fries!

If you are lucky enough to have a dehydrator, you can put the fries in there for a couple of hours.

Make sure they are not completely dry since they will still lose water while in the oven. The oven can also function as a dehydrator if the temperature is kept low (120°-170°F).

Make sure to follow tips 7 and 9 if you dehydrate them in the oven.

3. Soak them in water beforehand

This is a technique that works surprisingly well. You simply soak the potato fries in some water for 1-2 hours before baking them.

Feel free to change the water half-way through. By soaking them, some of the starches leech out into the water. The starch in potatoes hinders moisture from escaping, which leaves more water in the potato.

Make sure to rinse the potatoes well after soaking (to remove the starch) and pat them completely dry before cooking. If you don’t dry them well, you just add even more moisture.

4. Dip them in egg whites and flour

In order to create a crust, you can dip your fries in some egg whites and flour before baking.

You will need about one egg white and one Tbsp of flour (wheat, brown rice, quinoa etc.) for two medium potatoes.

Beat the egg whites until stiff peaks form. Coat the fries with the egg whites and slowly add the flour. Mix well, season and bake as usual. This really gives them a nice crust.

I have found that parchment paper works best as a surface if you want to make your homemade french fries crispy.

I believe this is because water can penetrate through the fine pores of the paper, whereas foil or waxed surfaces are more impermeable.

6. Place them on the bottom rack

When you place them on the bottom rack, the surface of the baking tray heats up more than if placed in the middle.

7. Make sure they are not crowded

This is probably one of the most common cooking mistakes. Only place as many fries on a rack as can fit without touching.

If you crowd them, there will be too much water vapor surrounding them (from all those fries!) and you essentially steam your fries. Steaming definitely does not make things crispy… ☺

did you know… ?
Smoking is also a major source of acrylamide. However, it gets easily overlooked because of all the other several thousand harmful chemicals in cigarette smoke…

8. Turn them halfway through

This not only helps because it forces you to do tip 9, but by turning them, you make sure two sides get a little bit brown (this also creates flavor) while preventing one side from getting too brown (bitter).

It also gives the other side a chance to let off some steam.

9. Open the door to the oven a couple of times

The reason why a dehydrator works is that there is a fan that constantly brings dry air in and removes the moist air.

Depending on the oven, water vapor mostly stays inside the oven, again steaming the things you are baking. Opening the oven a couple of times (3-5) during baking lets the water escape.

10. Make them in the microwave

I have never tried making sweet potato fries in the microwave, but I have made sweet potato chips like this before.

I have to warn you though… this is a little tricky and it is very easy to burn them. Trust me! I have a funny story about this, which I might share at a later time. ☺

To make them in a microwave, place the fries on microwave-safe paper. Make sure that there is only one layer of fries — don’t place them on top of each other.

Set the microwave to high and zap them for three minutes. Watch them closely the entire time. If you want them crispier, add one minute at a time, watching them CLOSELY.

Take them out when they start to get blistery or change color. Keep in mind that they tend to crisp up quite a bit more as they cool off.

health tip
A research team in Turkey found that precooking fries in the microwave also reduces acrylamide formation. The higher the level of the microwave the better (still don’t burn them!). This is probably because acrylamide takes some time to form, and zapping them in the microwave reduces overall cooking time.

I hope you found at least one or two tips that you want to try that don’t involve burning your french fries to a crisp.

Good luck with experimenting with your fries! And don’t worry if they are just not as crispy as you want them to be.

They still taste great, don’t they?! Also, if it makes you feel any better, they are probably a bit healthier when they are not super crisp.